↓
Home→Club History
The first meeting of the Penrith Kennel Obedience Club was held on the 23rd July, 1973.The first session of Obedience Training for Dogs was held at night on Monday 8th October, 1973 (Penrith Plaza Carpark). Training ceased over the Christmas period and in March, 1974 it was proposed that Sunday be the Club’s training day. Approval was given for the Club to use Regatta Reserve for Sunday training and this commenced in April, 1974.A Parade and Obedience Trial was held on the 18th January, 1976 and approval was given by the R.A.S.K.C. for the Club to hold a Championship Show on 16th January, 1977. (Weir Reserve was the venue for the Parade/Obedience Trial and for the first Championship  Show).In 1975 it was decided to purchase leads, check chains, etc, for sale at Sunday Training and this practice has continued. Obedience Classes were initially colour-coded, however in September, 1979, a numbering system took the place of the colour-coding system.Awards have been given to Club Members for Titles gained since 1979. Obedience Training and Club Meetings transferred to the Old Upper Castlereagh School in November, 1979.In August, 1980 Dr. J. Slezacek (an Honorary Member of this Club), recommended that vaccination certificates be sighted at the time of joining the Club and at Renewal Times.A second Championship Show conducted by the Club and the first July Show was held on the 3rd July, 1982. In addition, approval was given to the Club to hold Obedience Trials and the first of these was held on Saturday 12th July, 1980.  In 1981 this was changed and July Obedience Trial is now held on a Sunday..In March, 1983, the Club moved to a new venue, “Victoria Street Community Cottage”, for meetings and to used the grounds adjacent to the Cottage for Sunday training. In 1984, permission was given to conduct “Supplementary Register” classes at our Obedience Trial in July.
At a general meeting held in December 2021 it was decided by club members to discontinue the Sunday morning training sessions and continue with Wednesday evenings at the DOGS NSW facility. At the present our Conformation Shows are run as triple show on the first Saturday of July and the Obedience Trial is held on the second Sunday of July each year.  In 2016 the club was asked by Dogs NSW to run an Obedience trial on the Sunday of the October long weekend in conjunction with their State Titles Trial. Currently PKOC run Obedience and Rally trials July and October.
The Club has a break over the Christmas/New Year period starting from the beginning of December and recommencing training in February.
Training classes are conducted on a Wednesday to provide a service to the Community and many people join the Club initially to train the family pet to an acceptable level of behaviour. We have a number of members who become quite interested in the more advanced aspects of training and will go on to enter Obedience or Rally-O Trials or in some cases become interested in the Championship Show scene where they can show their pure-bred/registered dog or bitch and work towards attaining a Championship Title. Those who enter in Obedience work towards attaining the Titles of  CCD (Community Companion Dog),  CD (Companion Dog), CDX (Companion Dog Excellent), UD (Utility Dog), and UDX (Utility Dog Excellent) or, enter in Rally and achieve titles such as RN (Rally Novice), RA (Rally Advanced), RE (Rally Excellent) and RM (Rally Master). 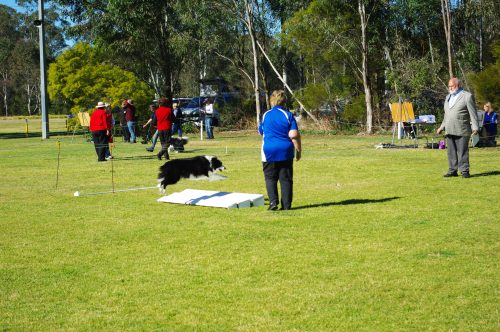